Not knowing what fruits contain lectins can feel extremely frustrating, like you want to pull your hair.

You want to eat a nice, juicy, sweet piece of fruit, and yet you’re worried about how it could make you feel – and maybe just flat out whether it has lectins.

For this reason, I’ve looked extensively for information on lectins in fruits and will share that valuable insight with you today.

As someone who started cutting out lectins years ago with incredible results, I wanted to know this information, but struggled to find it, and at times, couldn’t find much at all.

Thankfully, what I have to share with you today should help a lot.​

One fruit that contains lectins according to multiple studies is tomatoes.​ Tomatoes are not often considered a fruit, but technically, they are.

It’s been said that there are lectins in the skins and seeds of tomatoes, just like in many other foods. So one way that you may try creating sauce is to de-skin the tomato, de-seed it, and then cook the sauce in a pressure cooker. For more info and pre-made lectin-free tomato sauce, click here.

Tomatoes are also classified as nightshades, which is one of the main categories of high lectin foods.

Another high lectin fruit is white mulberries. In one study that contained research on lectins in fruits​, the stem bark, leaf, and fruit of white mulberries was found to be high in lectins.1

Oftentimes, non-edible parts of foods are high in lectins, but in this case, the fruit part of the white mulberry was found to contain them in substantial amounts as well.

In peaches, the fruit pulp and rind was tested. In grapes, the rind, white seed, and blue seed was tested.

Also, organic foods may have lower amounts of lectins, given that lectins act as a natural pest repellent. For this reason, some foods have been genetically modified to have increased lectin count, potentially to better ward off pests, such as pointed out in this study which mentions lectins in tomatoes. 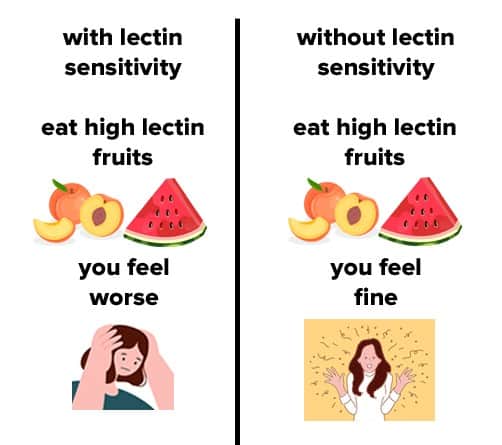 Now, let’s move on to some lectin-free and low lectin fruits.

Sometimes you want to bite into a juicy, mouth-watering piece of fruit and enjoy some natural unrefined sugar and a sweet snack.

For this reason, it can be great to know which fruits are generally regarded as fruits that are low in lectins.

In one study, dates, lemons, pomegranate, apples, plums, sweet oranges, and tangerines were tested and found not to contain lectins.1

​It’s worth noting that in the apples, only the seeds were tested – which obviously you don’t want to eat. That being said, apples are generally considered a good food to eat on a low lectin diet, so you may be interested to try them out and see how it works for you.

It’s worth noting that with regards to tangerine, the study did the test on Citrus reticulata, which could also be mandarin or clementines. Clementines and tangerines are two different varieties of mandarins.

Another fruit that I am personally an ENORMOUS fan of is blueberries. Even when I was very sensitive to many lectin foods, blueberries were great for me, and they still are today. In fact, I may eat more blueberries than 99.9% of people on the globe… haha.

Strawberries seemed to be good, in small quantities. While I can’t be certain they were working against me, and never did find much in the way of research on lectins in strawberries, I mostly stuck with blueberries, and ate 1-2 cups a day of them with ease. (Which by the way, is only 85 calories per cup).

Dates are another low lectin food that was mentioned above, and are incredibly sweet. You’ve probably seen them as ingredients in the grocery store in snacks, such as protein bars.

Avocados are also considered fruits, and are generally considered good to eat on a low lectin diet. Personally, I used to put them into a smoothie frequently, even when I was very sensitive to lectin foods.

Avocado oil is also widely considered one of the healthiest cooking oils. It has a high smoking point, which makes it easy to cook meat with on the pan. That being said, you may still opt for an animal-based cooking option, such as grass-fed butter, grass-fed ghee, or grass-fed tallow.

You’re probably better off going with organic, even if the non-organic doesn’t have lectins.

One more thing worth mentioning is that fruits have been said to be lower in lectins when they are in-season.

We know it can feel very daunting and take a long time to figure out how to eat to reduce pain, feel great, and achieve your goals. If you’d like to get results faster, and would like some help with that, ​click the button below to get our fast and effective lectin guide.