If you're looking for a comprehensive list of foods low in lectins, you've come to the right place. 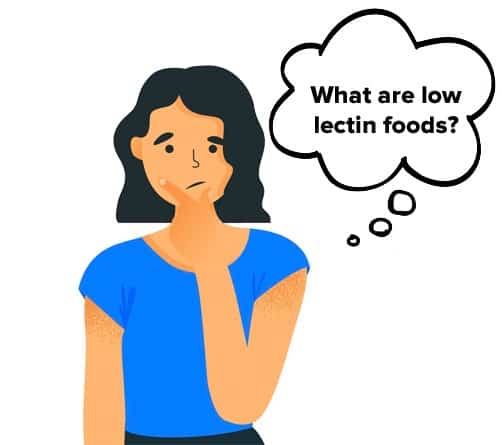 ​​Here's ​a list of 50 foods we've found to be great options on the lectin-free diet.

What Are Low Lectin Foods?

​Low lectin foods are low in the anti-nutrient lectin, which has been found to have a number of negative effects.

Perhaps the most popular article on lectins asked the question, "Do dietary lectins cause disease?" This at the very least, got peoples attention.

Some people find that ​they feel dramatically better when they cut down on their intake of ​​lectins. Besides simply avoiding foods high in lectins, there are also other ways to lower the amount of lectins you eat. We've listed ​seven ​of those ways below.

​7 Ways To Lower ​Lectins In Foods

There are many factors that affect the number of lectins and other anti-nutrients in foods. Here are some ways ​you can decrease your lectin intake, besides cutting down on certain foods that are high in the anti-nutrient.

Lectins are a natural defense against bugs and critters and have been said to be found in even higher ​quantities in genetically modified (GMO) foods.

​Some foods are said to be genetically ​modified ​to have more lectins, ​which can act as a larger deterrent against bugs and animals. Ultimately, however, this also means an increased amount of intake for humans.

There are other reasons eating organic can be beneficial, although not all of them are immediately noticeable. For example, some organic foods can taste significantly better, or can have more nutrients, thus making you feel better overall. These effects are more easily noticed than some others, such as for example, ingesting a GMO food which has a pesticide with known neurotoxins.

Overall eating organic can certainly have many benefits, and the lesser amount of lectins in organic foods is just one of those potential benefits.

The processes of soaking, sprouting, and fermenting have all been shown to decrease the number of anti-nutrients and lectins in foods. Fermenting has been said to cause difficulty for some people due to histamine, ​and in that case they will likely want to turn to sprouting and soaking foods which ​has been revered as highly beneficial.

The processes of soaking and sprouting have also been touted as common practice in tribes and groups many years ago, when people were more in touch with foods and the land.

It's been said that they did so at least in part as a result of it's easier digestibility​ and how much better ​it could make them feel.

The process of soaking before cooking foods is ​significantly easier than sprouting. Beans, for example, are a food that is often soaked before cooking.

Sprouting is a process by which you soak the food until it begins to sprout as if it is ready to grow like a seed in the ground. This reduces the number of lectins and other anti-nutrients in the food and also increases the ​availability of the nutrients. ​You can often buy certain foods sprouted, such as sprouted ​rice.

Cooking​ is perhaps the most commonly known approach to lowering the amount of lectin in ​foods, and the amount lowered depends on several factors including the temperature and length of cooking.

Lectins in beans, for example, are very high in quantity and beans ​eaten raw are highly toxic unless cooked properly. Another example would be pasta.

The issue is that cooking ​doesn't completely wipe ​all of the lectins and ​can still have significant enough numbers to cause issues. ​You can combine other ways to further lower ​the amount ​like ​eating organic and ​soaking or sprouting.

Other less common methods of cooking have also been said to decrease lectin count in foods. For example, pressure cooking has been said to dramatically reduce the count, and more information on that is mentioned in the ​beans page.

Foods that are grass-fed are likely to be lower in lectins and generally speaking better for you. Lower quality meats, for example, may be fed low-quality, GMO grains, corns, etc. that are unnatural and less healthy for the animals and may cause the meat to contain lectins. Other products like butter or cheese ​may also be labelled grass-fed ​which implies that the cows are grass-fed.

You may be wondering what grass-finished means.

Grass-fed and grass-finished is a term that refers to when the animal continues to eat grass, whereas a grass-fed animal may be started on grass but then fed grains, etc. later on.

There are many benefits to eating low lectin foods since they have been found to have multiple negative attributes. They also of course contain a variety of nutrients.

Reducing lectin intake could create a very quick turn of improvement in well-being, but it's also very important what you add in, besides just what you take out.